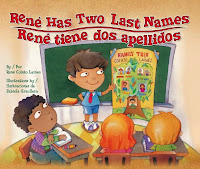 René Has Two Last Names/René Tiene Dos Apellidos, a bilingual children’s book about a boy from El Salvador who teaches his American classmates why he has two last names. They come from his father’s side, and his mother’s side. Without both — Colato Laínez – he would feel like “a hamburger without the meat.”
The book is written by an author of the same name, René Colato Laínez. Colato Laínez, a teacher, has written several picture books including the award-winning I Am René, the Boy / Soy René, el niño. The author has told other bloggers during his book tour that he writes to preserve and celebrate his culture. As a child he longed for books about children like him — immigrant children with two cultures. And these days it is common for Latino parents to thank him for writing their story too.