When I lost my first tooth in El Salvador, a fantastic ratón (mouse) took it. He was the same ratón that took my mamá’s, papá’s and abuelito’s teeth. Every child knew him. He was El Ratón Pérez and in exchange for a healthy tooth, I always received a surprise. Sometimes, I received money and other times toys and even tickets to the circus! I always eagerly awaited the next visit from El Ratón Pérez.

I became a teacher at Fernangeles Elementary School in Los Angeles. One afternoon, I heard the teacher next-door running and screaming through the hallway, “Ah, one of my students has a mouse in his room! I need to go to the office and call social services.”

The teacher was ready to faint from the impression. I asked her what was happening and she told me that one of her students lost his first tooth and that a mouse came to his room last night and took it. But this was not the worst part. All the other students said they knew the mouse, too.

“The boy said he wants the mouse to visit his house every night!” the teacher said.

“I knew that mouse and as a child, I also waited for his visits.” I told the other teacher. “ He is El Ratón Pérez, the Hispanic tooth collector. Last night this famous and adventurous mouse visited your student because he lost his first tooth.” The teacher started to laugh and did not go to the office. Instead, she went to celebrate with her student. 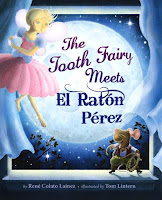 After this incident, I wondered what would happen if the Tooth Fairy met El Ratón Pérez for the first time? What would they say to each other? Would they get along? Read and find out. My new book, The Tooth Fairy Meets El Ratón Pérez, was released by Tricycle Press/Random House on March 23, 2010.

Early praise for the book:

“A marvelous story merging cultures seamlessly and with great humor. Adults will enjoy this read-aloud just as much as kids.” --- Sandra Cisneros, award-winning author of The House on Mango Street

“When Mexican-American Miguelito loses a tooth, a twinkly Tooth Fairy and her Latin American counterpart, El Ratón Pérez (an intrepid, Spanish-speaking rat) both show up. Laínez's creative story approaches the topic of cultural identity with humor and grace, while newcomer Lintern's colored pencil illustrations give it a sense of nocturnal whimsy."--- Publishers Weekly
“Young readers may not consciously recognize this tale as a metaphor for growing up in two cultures, but the story does model how to successfully negotiate a bicultural life by celebrating both aspects of Miguelito's Mexican-American heritage. An excellent selection for libraries serving bicultural families."— School Library Journal

“Colato Lainez keeps the storytelling lively with bilingual exclamations seamlessly embedded in the dialogue between the two tooth-seekers…readers are treated to a clever introduction to two charming folk customs.”---Kirkus Reviews
Posted by Rene Colato Lainez