The Young Library: Who gets the tooth after it's out? 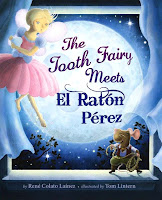 Many of us grew up with the Tooth Fairy leaving a few coins under our sleeping heads in exchange for baby teeth as they fell out.


But what if we had grown up in a Latin country? No Tooth Fairy.
Author René Colato Laínez grew up in El Salvador, where the legendary El Ratón Pérez patrols the night for baby teeth. Laínez recalls getting wonderful presents from El Ratón for each tooth.
So what happens in a bicultural home when both tooth collectors show up at the same pillow? Laínez imagines a clash of the icons in "The Tooth Fairy Meets El Ratón Pérez." His bright, lighthearted drama is a funny blend of the two cultures. The spunky dialogue with sprinkles of Spanish and bravado make a perfect read-aloud.
Read more at http://www.sacbee.com
Posted by Rene Colato Lainez