BOOK REVIEW: MY SHOES AND I 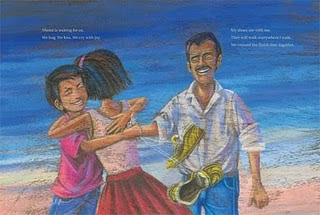 René Colato Laínez’s new picture book, My Shoes and I, is a Latino immigration story that touches on the yearning of a family to be whole, the hardship of border crossings, and a child’s resiliency through difficulties.
The story opens in El Salvador, with a young boy named Mario opening the Christmas present that his mother sent him from the United States: a new pair of shoes. Mario is elated as he tries them on, and they instantly become his most treasured friends as he embarks on the biggest adventure of his life: immigrating with his father to the United States.
Read more at Cristina Rodriguez Blog.
Posted by Rene Colato Lainez