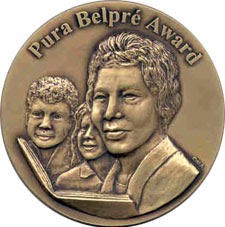 The Pura Belpré Award, established in 1996, is presented to a Latino/Latina writer and illustrator whose work best portrays, affirms, and celebrates the Latino cultural experience in an outstanding work of literature for children and youth.

“Green Is a Chile Pepper,” illustrated by John Parra, written by Roseanne Greenfield Thong, and published by Chronicle Books LLC.

“Separate Is Never Equal: Sylvia Mendez & Her Family’s Fight for Desegregation,” illustrated and written by Duncan Tonatiuh, and published by Abrams Books for Young Readers, an imprint of ABRAMS.

The Newbery Medal was named for eighteenth-century British bookseller John Newbery. It is awarded annually by the Association for Library Service to Children, a division of the American Library Association, to the author of the most distinguished contribution to American literature for children.

Winner
“The Crossover,” written by Kwame Alexander and published by Houghton Mifflin Harcourt.

Honor Books
“El Deafo” by Cece Bell, illustrated by Cece Bell and published by Amulet Books, an imprint of ABRAMS.

The Caldecott Medal was named in honor of nineteenth-century English illustrator Randolph Caldecott. It is awarded annually by the Association for Library Service to Children, a division of the American Library Association, to the artist of the most distinguished American picture book for children.

Winner
“The Adventures of Beekle: The Unimaginary Friend,” illustrated and written by Dan Santat, and published by Little, Brown and Company, a division of Hachette Book Group, Inc.

“The Noisy Paint Box: The  Colors and Sounds of Kandinsky’s Abstract Art,” illustrated by Mary GrandPré, written by Barb Rosenstock and published by Alfred A. Knopf, an imprint of Random House Children’s Books, a division of Random House, Inc., New York.

“The Right Word: Roget and His Thesaurus,” illustrated by Melissa Sweet, written by Jen Bryant, and published by Eerdmans Books for Young Readers, an imprint of Wm. B. Eerdmans Publishing Co.

“This One Summer,” illustrated by Jillian Tamaki, written by Mariko Tamaki and published by First Second.

Given to African American authors and illustrator for outstanding inspirational and educational contributions, the Coretta Scott King Book Award titles promote understanding and appreciation of the culture of all peoples and their contribution to the realization of the American dream. The award is designed to commemorate the life and works of Dr. Martin Luther King Jr. and to honor Mrs. Coretta Scott King for her courage and determination to continue the work for peace and world brotherhood.

Marilyn Nelson for “How I Discovered Poetry,” illustrated by Hadley Hooper and published by Dial Books, an imprint of Penguin Books (USA) LLC.

Kekla Magoon for “How It Went Down,” published by Henry Holt and Company, LLC.

Frank Morrison for “Little Melba and Her Big Trombone,” by Katheryn Russell-Brown, published by Lee and Low Books, Inc.

For a complete list of ALA awards and winners visit
http://www.ilovelibraries.org/booklovers/2015-youth-media-award-winners