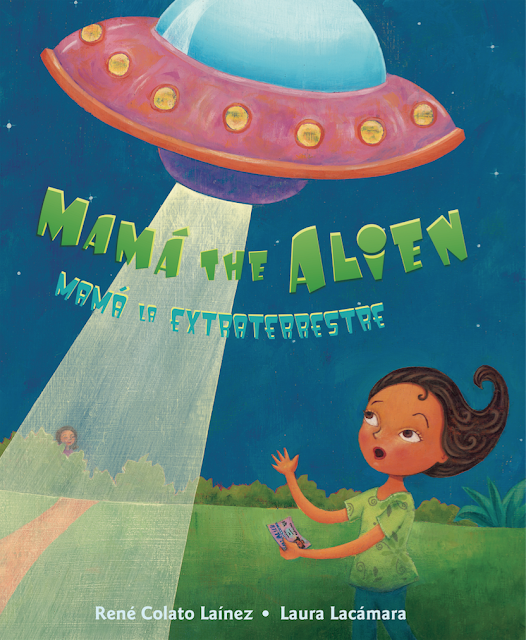 I am so excited to present my latest bilingual picture book, Mamá the Alien/ Mamá la extraterrestre.
Take a look to meet Sofía. She discovered mamá's old immigration card: RESIDENT ALIEN. Can her mamá be really an alien?

Description of the book:
Sofía has discovered a BIG secret. Mamá is an alien—una extraterrestre! At least, that’s what it says on the card that fell out of her purse. But Papá doesn’t have an alien card. Does that mean Sofía is half alien?
Sofía heads to the library to do some research. She finds out that aliens can be small, or tall. Some have four fingers on each hand, and some have big round eyes. Their skin can be gray or blue or green. But she and Mamá look like human people. Could Mamá really be an alien from another planet?
Filled with imagination and humor, Mamá the Alien/Mamá la extraterrestre is a sweet and timely immigration story, and a tender celebration of family, no matter which country (or planet) you come from.

René Colato Laínez has written more than a dozen award-winning books for young readers. A native of El Salvador, his goal is to write stories in which children of color are portrayed positively, with hopes and dreams for the future. This story was inspired by the many children of immigrants who have experienced the same misunderstanding as Sofía. When not writing or presenting at conferences or workshops, Colato Laínez teaches in a bilingual elementary school. He lives in Arleta, California, and you can find him online at renecolatolainez.com.

Laura Lacámara is the creator of several award-winning children’s books; and she is a popular presenter at schools, festivals, and conferences. Born in Cuba, Lacámara was delighted to illustrate this story because it is clever as well as meaningful, especially since she was the same age as Sofía in the story when her own mamá became a United States citizen. Lacámara also had fun creating her own versions of aliens! She lives in Venice, California, with her husband and their daughter. Visit her online at lauralacamara.com.