When immigrant children come to the United States, they experience a variety of emotional and cognitive adjustments in the new country. They have left behind a language, a culture and a community. From one moment to another, their familiar world changes into an unknown world of uncertainties. These children have been uprooted from all signs of the familiar and have been transported to an unfamiliar foreign land. In the process of adaptation, immigrant children experience some degree of shock. In the Inner World of the Immigrant Child, Cristina Igoa writes:

"This culture shock is much the same as the shock we observe in a plant when a gardener transplants it from one soil to another. We know that shock occurs in plants, but we are not always conscious of the effects of such transplants on children. Some plants survive, often because of the gardener’s care; some children survive because of the teachers, peers, or a significant person who nurtures them during the transition into a new social milieu."

Latino authors use their experience of being uprooted from their country of origin, being transplanted to the United States and their adaptation to a new culture in order to authentically and realistically portray the immigrant experience in picture books.

Immigrant children go through stages of uprooting to adapt to a new country: mixed emotions, excitement or fear in the adventure of the journey, curiosity, culture shock that exhibits as depression or confusion, and assimilation/ acculturation into the mainstream. These stages are not universal truths for all children and they may occur simultaneously or in varying degrees (Igoa).

During the first stage of the uprooting, children experience mixed emotions when the parents tell them that they will be moving to another country. Sometimes they are not informed until the actual day their journey begins. Most of the time the children do not know where they are going. They only know they must go because their parents are going. They do not have a choice.

In the second stage the children experience excitement or fear during the journey by train, car, plane, boat or on foot. They are usually with a parent or relative, and there is much discussion among them in their own language. The long and tiring journey begins.

The third stage of uprooting, curiosity, occurs when children arrive in the new country. At first everything looks good. After a tiring trip, the immigrant children relax. For them everything looks good and new, especially if the children come from a poor small town or a war torn country. Everything is like a miracle, big buildings, warm water, carpet on the floor, etc.

During the fourth stage, culture shock that exhibits as depression or confusion, the dream or curiosity disappears and for the immigrant children the nightmare begins. This is the more traumatic stage in the lives of the immigrant children. They need to go to school. They are now separated from the warmth of extended family members and their native language. Immigrant children may become depressed or confused and let down. They may enter a silent period, keeping their emotions inside.

During the last stage, assimilation/acculturation into the mainstream, immigrant children face pressure to assimilate/ acculturate to the new country.

Authors Suárez-Orozco describe three different styles of identity adopted by children of immigrants in their book Children of Immigration: ethnic fight, adversarial identities and bicultural identities. In the ethnic fight, some children abandon their own ethnic group and mimic the dominant group. Immigrant children assimilate and become carbon copies of the new culture. They give up their values and ways of behaving to become part of the mainstream culture. If the adversarial identities style is adopted, children construct an identity in opposition to the mainstream culture and its institutions. Children do not care about the dominant society. They do not make an effort to learn English and, most of the time, they return to their countries. If children adopt a bicultural identity, children develop competence to function in both cultures. Immigrant children acculturate and become part of the mainstream culture without discarding past meaningful traditions and values.

I will examine the work of Latino authors who have experienced the phenomenon of uprooting. By analyzing their work and learning about their uprooting process through published and personal interviews and by comparing them with my own immigrant experience, I will explore the topic of authenticity in the picture book format.

In order to write about identity in immigrant children, authors need to write an acculturation story, a story where the protagonist becomes part of the mainstream culture without discarding their language and culture. These Latino authors validate the children’s names, language, roots and culture. They want immigrant children and any other reader to feel proud and happy about their roots. 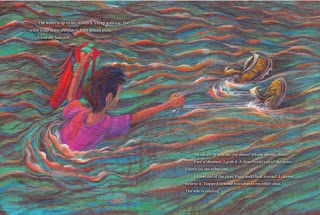