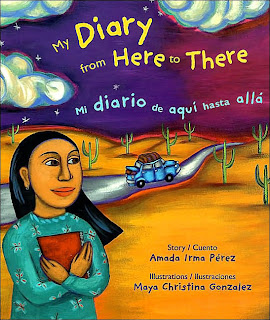 In My Diary from Here to There/ Mi diario de aquí hasta allá, Amada Irma Pérez writes about her own journey as a girl crossing the border with the help of her family. In her diary little Amada records her fears, hopes, and dreams for their lives in the United States.

Amada is happy living in Mexico, but one morning she hears that her parents want to come to the United States. Amada is very worried. She experiences the first stage of uprooting, mixed emotions:

“Dear Diary, I know I should be asleep already, but I just can’t sleep. If I don’t write this all down, I will burst! Tonight after my brothers- Mario, Víctor, Héctor, Raúl, and Sergio- and I climbed into bed, I overheard Mamá and Papá whispering. They were talking about leaving our little house in Juárez, Mexico, where we’ve lived our whole lives, and moving to Los Angeles in the United States. But why? How can I sleep knowing we might leave Mexico forever?”

Amada is the typical immigrant child who is already rooted to her country and culture. She is like any child in Latin America who enjoys playing with her friends, going to school, and reading and writing in her native language. When I came to the United States, I was fourteen years old. I had nine years of instruction in Spanish. Like Amada in Mexico, I was rooted to my Salvadoran soil.

For immigrant children who are already rooted to their countries, the idea of leaving a known territory for an unknown dark place is terrifying. Amada is in shock. She loves her house, friends and speaking Spanish everywhere. She worries:

“But what if we’re not allowed to speak Spanish? What if I can’t learn to speak English? Will I ever see my friend Michi again? What if we never came back?”

These are typical questions that immigrant children have when they leave their countries. I was worried that I did not know how to speak or write in English. Before we left El Salvador, I tried to write a sentence in English. The Spanish/English dictionary was very wordy and heavy. After the third word, I quit, “I go to Estados Unidos con mi mamá.” (I am going to the United States to be with my mother). English seemed something impossible.

Amada and her family leave and the journey begins. Amada is in the second stage of uprooting, excitement or fear in the adventure of the journey. She says:

“Our trip was long and hard. At night the desert was so cold we had to huddle together to keep warm…Mexico and the U.S. are two different countries, but they look exactly the same on both sides of the border, with giant saguaros pointing up at the pink-orange sky and enormous clouds.”

When I left my country I traveled with only my father. Neither he nor I had ever been to the United States. I left behind my grandmothers, brothers, sister, and most of my extended family members. Some immigrant families make numerous intermediate stopovers for different lengths of time in several places. Amada and her family go to Mexicali and stay in her grandma’s house. Because Amada’s father is an American Citizen, he is the only one who can cross the border. Amada is terrified. She loves her father with all her heart. Immigrant children can relate to this authentic experience. Many children suffer through a separation from their parents when they immigrate.

Amada and the rest of the family wait at the Mexican border for the green cards that her father is trying to get. All this time, Amada is writing in her diary all her experiences about her journey. Finally, the papers are ready and Amada can cross the border.

“What a long ride! One woman and her children got kicked off the bus when the immigration patrol boarded to check everyone’s papers. Mamá held our green cards close to her heart.”

Amada does not go through the third stage, curiosity, but her brothers do. They go through this stage when they are still in their Mexican house.

“The big stores in El Paso sell all kinds of toys!”
“And they have escalators to ride!”
“And the air smells like popcorn, yum!”

Most immigrant children have only seen the United States in American movies. America looks like paradise, the land of promise and opportunities.

Because this book is about Amada Irma Perez’s journey to the United States, she does not write about the fourth stage of uprooting, culture shock that exhibits as depression or confusion. However, we can tell that since the beginning of the story, she has been in this stage. She even makes references to the silent period, when she writes that she is afraid that she would not be allowed to speak Spanish and she would never learn English.

At the end of the story, Amada is in the final stage of uprooting. She has acculturated to the mainstream. She goes to school to learn English. She discovers that changes are not easy but that she can overcome any fear with the help of her family.

“Just because I’m away from Juárez and Michi, it does not mean they’re not with me. They are here in your pages and in the language that I speak; and they are in my memory and my heart. Papá was right. I am stronger than I think--in Mexico, in the States, anywhere.”

Amada Irma Perez presents an authentic immigrant story. Many immigrant children living in the United States can relate to her feelings about leaving her country and her separation from her father.
Posted by Rene Colato Lainez