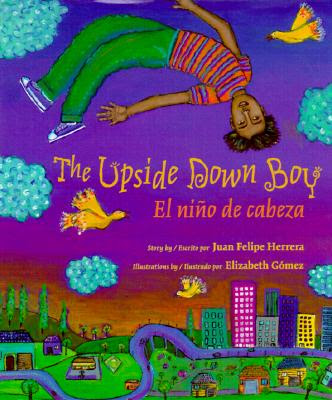 The Upside Down Boy/ El niño de cabeza is Juan Felipe Herrera's memoir of the year his migrant family moved to the city so that he could go to school for the first time. Neither of his parents had the opportunity to complete school, but valued the importance of education. Juanito is not an immigrant himself but his parents are. However, he has grown up singing and speaking Spanish with his parents, friends and neighbors. When he comes to school, he enters into a different strange world.

Just as other immigrant children do, he experiences the fourth stage of uprooting, culture shock that exhibits as depression or confusion. Juan Felipe Herrera writes:

“Don’t worry, chico," Papi says as he walks me to school.
I pinch my ear. Am I really here?
Maybe the street lamp is really a golden cornstalk with a dusty gray coat.
People speed by alone in their fancy melting cars. In the valleys, campesinos sang “Buenos dias, Juanito.”
I make a clown face, half funny, half scared. “I don’t speak English,” I say to Papi.
“Will my tongue turn into a rock?”

When immigrant children enter school for the first time, they have so many questions running through their heads and no answers at all. And if teachers answer their questions, immigrant children do not understand them because they are in English. Every time that I wanted to speak in English, I felt that my tongue stuck to my teeth. I could not produce a sound. I felt paralyzed.

When Juanito comes to his classroom, he is terrified. School was not what he had expected. The room looks so strange. It feels like everyone is staring at him. Juanito enters into the silent period:

¿Donde estoy? Where am I?
My question in Spanish fades as the thick door slams behind me.
Mrs. Sampson, the teacher, shows me my desk. Kids laugh when I poke my nose into my lunch bag. The hard round clock above my head clicks and aims its strange arrows at me.
“What is your name?” Mrs. Sampson asks.
My tongue is a rock.

This is the first interaction between Juanito and his teacher. When the teacher asked for his name, Juanito does not have a clue of what she is saying. He knows that he has to say something but he is not able to do it. This is a common experience for immigrant children. My first day at school, a counselor who spoke a few words of Spanish went over my classes for the semester. She spoke very slowly in English and asked me in Spanish, “Comprende?” (Do you understand?) I nodded the whole time, but I did not know what she was talking about.

During recess time Juanito does not know what to do. He sits down and eats his potato burrito while everyone else plays. He feels so strange. Juanito often does the wrong thing during times designated for other activities.

The high bell roars again. This time everyone eats their sandwiches while I play in the breezy baseball diamond by myself.
When I jump up everyone sits.
When I sit all the kids swing through the air.
My feet float through the clouds when all I want is to touch the earth.
I am the upside down boy.

Immigrant children can vividly relate to this experience. When they enter school they feel frightened, shy, and "de cabeza," like an alien in another planet. In Junior High school in El Salvador, students stayed in their own classroom and teachers moved from classroom to classroom. At my new American school, I sat down in the classroom while everyone left. I waited for my next teacher and he never came. “You have to go to another classroom,” a boy said in Spanish.

Fortunately, Juanito has a teacher like Jane Medina. Mrs. Sampson is very understanding with him. She became the light at the end of the tunnel.

Mrs. Sampson invites me to the front of the class.
“Sing Juanito, sing the song we have been practicing.”
I pop up shaking. I am alone facing the class.
“Ready to sing?” Mrs. Sampson asks me.
“Three blind mice, three blind mice,” I sing.
My eyes open as big as the ceiling and my hands spread out as if catching rain drops from the sky.
“You have a very beautiful voice, Juanito,” Mrs. Sampson says.
“What is beautiful?” I ask Amanda after school.

Mrs. Sampson is the one who helps Juanito to leave the fourth stage of uprooting and enter the final stage, assimilation and acculturation into the mainstream. Mrs. Sampson helps him find his voice through poetry, art, and music. With her encouragement and the support of his family, Juanito not only fits in, but shines. Mrs. Sampson is the teacher, the human being, the hope that every immigrant child desperately needs to feel useful in the classroom.

At the end of the story, Juanito feels fine at school. He is drawing, painting, singing and speaking. Juanito overcomes his fears in school despite the challenge of adapting to an unfamiliar language and culture. Juan Felipe is so grateful to his teacher that he dedicates this book to her.

For Mrs. Lucille Sampson, my third grade teacher at Lowell Elementary School, Barrio of Logan Heights, San Diego, California, 1958, who first inspired me to be a singer of words, and most of all, a believer in my own voice. Gracias. Thank you.

Mrs. Sampson had touched the future and filled Juan Felipe Herrera’s life with hope. After this experience, Herrera felt liberated and did very good at school. Now he is a poet, a writer and a creative writing teacher.

Juan Felipe Herrera uses his own experiences in third grade and gives a
message of hope to immigrant children. While Herrera was born in the United States to a family of Mexican immigrants, his native language was Spanish, and he grew up in a house with Mexican stories and immigrant relatives arriving from Mexico. Therefore, he can relate to the immigrant experience. In an e-mail interview, he said:

I was pretty insulated-- living on the outskirts of cities, in small, tiny towns, mountains, rancho and lake communities. When I did enter school, the big shock did come -- however it was a muted shock; how do you talk about it, what is it that is happening; it's like losing your voice when you are thrown into an opera on your life. My imagination flourished; I became a passionate observer and dreamer, I created a parallel universe.

Juan Felipe Herrera believes that Latino Children need more stories about their lives in the United States. He wants to see more new Latino authors writing for their own communities.

In order to write an authentic story, you need honesty at all levels, real words from real people and incidents, crises and transformation,suffering and joy. The book must have a kind mind and a warm giant heart.

As a creative writing teacher, Herrera’s goal is to awaken students' appreciation for their own voice, cultural life, and personal expression. He wants to pass on the encouragement and help that Mrs. Sampson transmitted to him when he was a child. His message for immigrant children is, “Always believe in yourself; don’t forget where you come from and don’t be afraid of life.”
Posted by Rene Colato Lainez