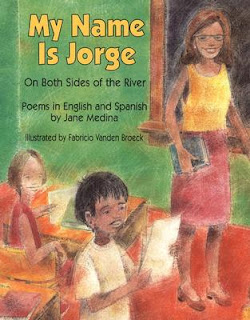 My Name is Jorge On Both Sides of the river is a collection of 27 poems in English and Spanish about another Jorge’s immigrant experience in the United States.
Jane Medina starts with the second stage of uprooting, excitement and fear in the adventure of the journey. Every time that Jorge crosses the busy street to go to school, he always remembers the time when he crossed the river. Jane Medina reveals Jorge’s fears during this odyssey in the poem The Busy Street.

I’m holding Mimi’s hand very tight, again
as tight as I held it
When we crossed the river to come here.
I was so afraid.
Mimi and I had to cross first.
while my mamá and my papá waited
on dry, Mexican sand.
Mamá stands under the stop light
making us go first again.
She is pushing the air toward school with one hand.
She is telling us to go fast
-fast across the busy street.
At least we crossed the river only once.
We have to cross this street every day.

My name is Jorge.
I know that my name is Jorge.
But everyone calls me
George.
George.
What an ugly sound!
Like a sneeze!”
GEORGE!”
And the worst of all
is thatthis morning
a girl called me
“George”
and I turned my head.
I don’t want to turn
into a sneeze!

In this poem Jane Medina is validating Jorge’s name and the name of every immigrant child. Jorge is not a sneeze; he is a child. Even though George is the literal translation for Jorge in English, for the child it is a completely different word not related at all to his name. This is my favorite poem of this book, because I can relate to it. In the United States, Rene is a girl’s name. Everyone that saw my name thought that I was a girl. I could see the expression on their faces when they saw me responding to René, my name.

Immigrant children are very smart. However when they do not speak the language of instruction they cannot do the work. From one moment to another, their self-esteem drops. They are not brilliant anymore. Jane Medina writes:

This poem describes the daily reality of immigrant children in schools around the country. I saw my own reflection in all Medina’s poems. For me Math was the safety belt that kept me from falling out of the English car that I tried to drive. Numbers are numbers anywhere.

It is very hard to see smart children struggle at school because they cannot do the work. It is typical for these children to fail a test. It could have been an easy test for any child who spoke the language. However, for immigrant children this strange language is a barrier too high to jump. In the poem The Test, Jane Medina writes:

I felt my black eyes
get blacker as I stared at the test.
Mrs. Roberts took a step.
I turned my head and she was looking at me.
She saw the tears
-like thick glasses stuck to my eyes.
We both tried to ignore them.
I push the paper away.
This test is too hard for me.

This poem can touch the heart of every immigrant child, because “This test is so hard for me,” is a very common phrase for these children. Immigrant students make up a large majority of children who drop out in big cities; children that could not do the work that teachers expected.

Jorge enters into the silent period. His heart jumps every time his teacher asks a question. This is not because Jorge does not know the answer. It is because, he is afraid of speaking English.

Invisible
If I stay very still
and breathe very quietly,
the Magic happens:
I disappear
-and no one sees me
-and no one hears me
-and no one even thinks about me
And the teacher won’t call on me.
It is very safe being invisible.
I’m perfect!
I can’t make mistakes
-at least nobody sees them,
so nobody laughs.

I have been the invisible student sitting in the last chair at the back of the classroom hoping that the teacher would not call on me. The first time that a teacher asked me to read an English text, I froze. I read the text using my Spanish phonic skills. Everyone laughed, I did not know why. From that day on, I decided to be invisible.

The silent period takes a long time. Especially when there is no support from peers and adults. For immigrant children this period is even harder when their native language is not appreciated. In Dirty Words, Jane Medina writes:

I wish my language didn’t
sound like dirty English words.
The grown-upsfrown
when I speak Spanish,
and the kids laugh.

All immigrant children in the United States can reflect on this poem. Jorge needs the affection from a teacher who can help and support him. When immigrant children see the work of their English-speaking classmates, they feel insecure even if they are doing their best. In the poem Sneaky, Jorge wants to hide his paper.

I hid the paper inside a
big, wavy, white stack of papers
on my teacher’s desk.
I want her to see it
-but not till after school.
I’m scared that it’s not good enough.
I think I spelled too many words wrong,
but I don’t know which ones.
I hope she understands it.
I hope she likes
me.

In this poem Jorge does not care as much about his paper. In the last line, just by using a word, me, Medina reveals what Jorge really needs, the affection of his teacher.

In my high school, at the beginning of the semester in an English Composition class, my English teacher asked the English learner students to raise their hands. Then she told us that most immigrant students failed her class. The teacher said that it would be a good idea to visit our counselors and ask for an easier class. This class was a college requirement. Even though I felt insecure, I decided to stay. A week earlier, I had sent my college applications to three universities. Like Jorge, I needed someone who believed in me. Many times a little affection and love from teachers can do wonders for immigrant children.

Jorge enters the fifth stage of uprooting, assimilation/ acculturation into the mainstream, when his teacher begins to believe in him. Jorge begins to feel proud of his work. He is not dumb anymore. He has hope that he could be smart again. In the poem My Paper, he is excited.

Immigrant children need to see more stories and poems like My Paper. They have to see positive role models in literature. When immigrant children read about characters like themselves who are struggling at school and finding ways to resolve their problems, they receive a message of hope.

In this English class, I paid attention, did all the work, and studied for many hours. One afternoon, the teacher was very upset because no one followed her instructions for one composition. She showed the class, the only paper that followed the rules; it was mine. My teacher smiled at me. That simple smile transformed my fears into hopes in that English composition class. I can proudly say that I got a B+ as my final grade in Miss Bass’ class. With effort and perseverance from the students and affection from the teacher, immigrant children can begin to see the light at the end of the tunnel.

Now that Jorge is acculturated he is ready to defend and validate his name by himself. Jane Medina presents a proud Jorge that even gives his teacher a lesson in the poem T-Shirt.

Teacher?
George, please call me “Mrs. Roberts.”
Yes, Teacher.
George, please don’t call me “teacher!”
Yes, T- I mean, Mrs. Roberts.
You see, George, it’s a sign of respect to call me by my last name.
Yes…Mrs. Roberts.
Besides, when you say it, it sounds like “t-shirt.”
I don’t want to be turn into a t-shirt!
Mrs. Roberts?
Yes, George?
Please, call me “Jorge.“

Good for Jorge, he could defend himself. This is another poem that defends the native roots of every immigrant child. I could never defend my name by using words. When people said, “Oh, you are a boy!” I only nodded with pride. As an adult, I had the urge to defend my name. I Am René, the Boy/ Yo soy René, el niño, my second picture book was the way that I found to tell everyone the meaning of my name. I am pleased that it became a picture book with a good role model for immigrant children.
At the end of her book Jane Medina has an acculturation story. Jorge will not lose his roots. He lives and studies in the United States, but he will always be Jorge on both sides of the river.

I have lived the immigrant experience through my husband, friends and students. Jorge was one of my students in my fourth grade classroom. One year later, I saw him sitting on a bench. He did not look very happy. He told me that his new teacher called him George. He did not like it at all. It was then and there when I decided to write this book.

The result was this wonderful book that touched me very personally. Jorge is me, a student trying to do his best at school but struggling with his identity and a new language. This book is authentic because it reveals the struggles of immigrant children in Jane Medina’s classroom.

Jane Medina believes that there are many multicultural books that are not authentic. She has read many immigrants stories that go from one extreme to another--either all sweetness or a horrific experience. She says: