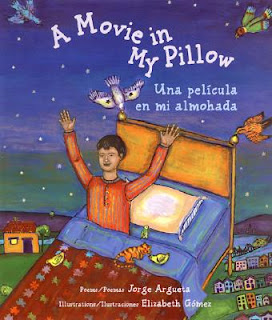 A Movie in My Pillow/ Una película en mi almohada is a collection of 21 poems written by Salvadoran author Jorge Argueta. In these poems Jorge Argueta evokes the wonder of his childhood in rural El Salvador, his experiences of being an immigrant, and his confusion and delight in his new urban home in San Francisco’s Mission District.

Argueta comes from a war torn country. Bombings, shootings and danger of being killed in the streets are common fears and anxieties that immigrant children from war torn countries have in common. In his poem With the War, he writes:

Streets
became so lonely.
Doors
were made of metal.
Wind
kept on howling.
And we never
went out to play.

What little Jorge really wants is a place where he could go out and play. Unfortunately, during a war kidnappings, bombs, and shootings occur on a daily basis. There is no secure place for anybody. Children in war torn countries have to play inside their houses. I can relate to Argueta’s experience because I was a child during the civil war in El Salvador. The only place I felt secure during the long and dangerous shootings was under my bed.

Argueta combines the first two stages of uprooting, mixed emotions and excitement or fear in the adventure of the journey, in the poem When We Left El Salvador.

Little Jorge comes to the United States and enters the third stage of uprooting, curiosity. In Wonders of the City Argueta writes:

Here in the city there are
wonders everywhere.
Here mangoes
come in cans.
In El Salvador
they grew up on the trees
Here chickens come
in plastic bags.
Over there
they slept beside me.

For little Jorge living in a modern city was like a fairy tale scene. When my mother and I went to the shoe store for the first time, I was amazed when I saw the door open by itself. It was like magic.

Little Jorge enters into the fourth stage, culture shock that exhibits as depression and confusion. It does not happen at school; it happens at his house. In Sidewalk Snakes he is afraid of losing his father.

Jorge’s father is the only loved one living with him. If something happens to his father, Jorge will be alone. For immigrant children who are separated from their loved ones, this stage is crucial and painful. When I knew that my older brothers were coming, I marked the date on the calendar. If everything went fine, they would arrive in ten days. On the 11th day, I could not sleep. On the 12th day, I prayed to all the saints in heaven. That same day, we received a call from an immigration detention center. My brothers had been caught when they were crossing the border.
Immigrant children deal not only with problems at school, but also with their internal feelings about missing their relatives. In Voice from Home Argueta describes his relationship with his grandmother.

From my uncle Alfredo
I received a great surprise-
a packet in the mail
from El Salvador.
Inside I found a tape
with my grandma’s voice
talking and singing to me
In Nahuatl and Spanish:
“Jorge, Jorge, maybe
you will never come back.
Remember when you sat
next to me in the river bank?”
“Jorge, Jorge, don’t forget
that in Nahualt ‘tetl’
means ‘stone’ and ‘niyollotl’
means ‘my heart’ ”

This poem reminded me of my grandmother who died a month after I arrived in United States. My mother and I did not have a chance to attend her funeral. I never even had the chance to say good bye.

Little Jorge is in the last stage of uprooting, assimilation/ acculturation into the mainstream, when he reunites with his family. For immigrant children, this event is wonderful. There will always be problems in the new country but now they have the support of their families. Together everything will be easier. In Family Nest Argueta writes:

Today my mamá
and my little brothers
arrived from El Salvador.
I hardly recognized them
but when we hug each other
we feel like a big nest
with all the birds inside.

This is a wonderful poem of family reunion and every immigrant child can relate to it. My parents hired an immigration lawyer to defend my brothers. They got a temporary visa to stay in the United States for six months. We celebrated our reunion for many days.

Jorge acculturates. He is ready to become whatever he wants. His family gave him the hope that he was longing for. Argueta concludes the book with A Band of Parakeets.

Every Saturday morning
Mamá and Papá
my little brothers
and I walk
on 24th Street.
We are like a band
of parakeets flying
from San Francisco
to El Salvador
and back again.

After my brothers arrived in the United States, I felt more secure at home and school. Now I had someone to talk to after school. They helped with my math and I helped them with their English. Like Jorge’s family we were a band of parakeets.

The pensive yet playful character of Jorge in A Movie in My Pillow/ Una película en mi almohada voices Argueta's own challenges and joys in adjusting to a drastically different landscape. Also, he is reflecting the voices of other Central American immigrants that he worked with in a homeless shelter. Jorge Argueta is writing from these personal experiences. He is one of the estimated 500,000 Salvadorans who immigrated to the U.S. in the 1980s due to a cruel civil war. In an interview with Criticas Magazine, Argueta said:

To write an authentic and realistic story, you have to live it, suffer it, and learn from it. El Salvador is in everything I write. My books are not only my stories but also the stories of thousands of Salvadoran children who left their country during the civil war in the 80’s. I believe that immigrant kids and adults from El Salvador as well as those from other countries and cultures, will see themselves reflected in this book because its main theme is immigration.

A Movie in My Pillow/ Una película en mi almohada is one of my favorite bilingual books. When I discovered this book, I jumped with joy. This was the first picture book about a Salvadoran boy published in the United States. As a Salvadoran, I felt proud of this book. Jorge Argueta tells my immigration story.

Jorge Argueta wants to be a role model to immigrant children. He visits school classrooms all around the United States.

"I stand in front of the children who look like me and say, “I am an author, and these are my books.” That makes children feel good. They want to write books too. Children are natural poets; I simply show them a word game and explain that poetry helps us to express happiness, anger, beauty, pain, and all the other amazing feelings life offers. Words make us fly I tell them, and indeed, we fly."

Argueta inspired me to fly and to tell my Salvadoran stories. To this day, there are only two Salvadoran authors writing picture books for children in the United States: Jorge Argueta and me.
Posted by Rene Colato Lainez